The Resident Service in charge of maintaining the Master list of children and adult Aurovilians as well as New comers. They help and coordinate concerning visa renewal and residential permit related works.  They were informed by several Aurovilians of foreign origins that they have been asked by the Secretary of Auroville Foundation’s office to sign a letter in order to receive their letter of recommendation to obtain the extension of their visa. This is a completely newly introduced step. The point 4 is going against the very aims and ideals of Auroville.

Out of 3312 individuals in Auroville (Adults and children), 1893 are concerned by visas. 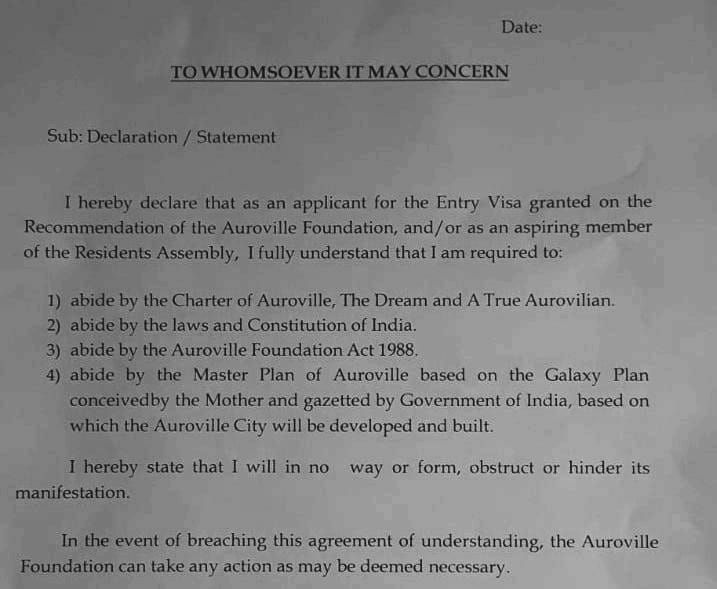 1. In Auroville, newcomers and applicants for visa renewal are now being forced to sign a declaration (see below) under threat of being denied access to the one place “where all human beings of goodwill who have a sincere aspiration” should be able to live freely as citizens of the world under the sole authority of the supreme truth . This was Mother’s dream. Now it appears as if Aurovilians must interpret “supreme truth” as being synonymous with that of the Auroville Foundation.

2. The new declaration that has to be signed by anyone seeking a visa renewal says that in “no way or form” is anyone to obstruct or hinder the manifestation of a model of town development (ie the master plan) that is contentious, being sought to be implemented in an authoritarian manner, and subjected to legal proceedings.

5. Given the turbulent, if not outright traumatic, events of recent weeks, the first question to consider about this declaration must be this; to what extent does such an authoritarian and divisive approach contribute to the “cohesion and integration of Auroville,” the promotion of which is a legal duty of the Governing Board? Clearly, it does not. This is quite separate from the question of how making Aurovilians sign such a declaration promote a spirit of collaboration (the true spirit of Auroville), this being part of the Auroville ideals that the Governing Board have a legal duty to promote. The approach of the declaration is one of unity or exclusion, not one of unity in diversity. It is an affront to one of Auroville’s core ideals.

6. Equally relevant, is the question of how point 4 (regarding the master plan) relates to point 1, 2 and 3 of the declaration. Prima facie, to say the master plan’s development along current lines cannot be hindered in any “way or form” suggests that it is now objectionable to even speak publicly against the master plan (or rather what is being sought to be done in its name). Is that intentional? Articles 19(1) (a) and (b) of the Indian Constitution 19 tells us:
“(1) All citizens shall have the right—
(a) to freedom of speech and expression;
(b) to assemble peaceably and without arms;…”

7. Is the enshrined right of free speech given by the Constitution of India still honoured in Auroville by the Auroville Foundation? Is it now curtailed in relation to matters concerning the master plan? We need to know. Equally importantly, if the right of free speech is still guaranteed to Indian citizens, is it also guaranteed for non Indian Aurovilians or is the Auroville Foundation seeking to create two classes of citizen rights. Again, we need to know.

8. If this declaration contains the possibility of a division between the rights accorded to Indian and non Indian Aurovilians, it also has the power to sow division between current Indian Aurovilians (who did not have to sign such a declaration) and new ones who will. Has thought been given to the potential conflicts highlighted here, or are they to be compounded by an even more egregious action of seeking to make the declaration retrospectively applicable to all Aurovilians regardless of when they felt the pull of the Charter?

9. The practical effect of point 4 of the declaration is that no signatory to the declaration can challenge the Auroville Foundation even if there are legitimate questions of legality regarding the interpretation of what is permissible under the law in relation to the master plan. Is the Auroville Foundation suggesting it is above the law of India and not subject to question or challenge on this matter by Aurovilians? It is an invidious position to adopt for a town dedicated to human unity.

10. The Auroville Foundation may not like to countenance the prospect of a Court or Tribunal, whether that be the National Green Tribunal or some other forum, ever finding against them (either entirely or in part) regarding their interpretation of the master plan. But what if that happens? Would Aurovilians still be expected to toe the party line, even if the Indian courts have said the Auroville Foundation’s stance needs to be modified?

11. Point 3 of the declaration states a duty to abide by the Auroville Foundation Act 1988. Section 19 of that Act gives the Residents’ Assembly the right to allow the “admission or cause the termination of persons in the register of residents…” . On what legal basis is the Auroville Foundation (or rather the Secretary or Governing Board) allowed to interfere with that discretion by interposing an additional condition of residence relating to strict ideological adherence to a highly contentious interpretation of the master plan’s modus operandi of implementation? The answer is by no means obvious.

13. In drafting such an extreme declaration, one that is sure to cause anguish amongst Community members fearing being kicked out of Auroville, it is fair to have expected some form of consultation and advice before implementation. The more extreme a declaration, the more profound the potential violations of an individual’s rights and liberties (including the right to a home life in Auroville), the profounder the level of consultation. That is the way things normally happen. Who was consulted and who advised on this draconian declaration? There has been no consultation with the Residents’ Assembly. It would have been reasonable to expect this, particularly given its right to determine admission to and termination from the register of residents. There has not even been a notification to the Community on Auronet. Knowledge of this declaration has been spread by word of mouth. This, of course, exacerbates fear that rights and liberties are being surreptitiously diminished.

14. All Aurovilians love this special place that has pulled us all close to its heart. It is grossly unfair to threaten to deprive anyone from continuing to live here because they have legitimately different views from those unidentified individuals who have drafted this declaration. The people, particularly if they are fellow Aurovilians, who drafted this declaration, are respectfully urged to withdraw it in its current form and reflect on the fact that all of us are part of a family, children of the Mother. We are meant to be brothers and sisters. Family members should not hold threats over each others’ heads.

TO WHOMSOEVER IT MAY CONCERN

I hereby declare that as an applicant for the Entry Visa granted on the Recommendation of the Auroville Foundation, and/or as an aspiring member of the Residents Assembly, I fully understand that I am required to:

I hereby state that I will in no way or form, obstruct or hinder its manifestation.

In the event of breaching this agreement of understanding, the Auroville Foundation can take any action as may be deemed necessary.