Jan 3, 2023 | Land Matters, Processes by-passed, Statements by the RA and the Working groups

The Land board is clearing undergrowth and small trees in order for the marking to be done of the plot / project area extents of the project called Mother Garden. Permission has been given to this project by the illegaly appointed town developpement council called ATDC. The Town Development Council selected by the Residents Assembly is adressing this letter below to the project holders and to the land board (The secretary office has dismissed several members of the land board selected by the RA so as to appoint individuals favorable to her actions thus disrecpecting the Auroville processes).

We are writing to you with several concerns regarding the Mothers Flower Garden project as currently envisioned. While we understand that you have received ‘site permission’ from the people currently posing as the ATDC, it does not free you of the responsibility to adhere to the NGT judgement or agreed Auroville processes.

We have been told and observed that the Land board is clearing undergrowth and small trees in order for the marking to be done of the plot / project area extents. We noticed that they are clearing up to the fence line that runs along the Kindergarten road. We would like to caution that even by your application the project area does not extend all the way up to the road / fence line, for reference please see the map attached, and therefore any clearing should be carefully done only where needed for the marking to take place i.e. a max 2m stroke along the proposed fence line. That being said, there are several other concerns regarding the clearing that is premature at best.
We would like to point out that under the pretext of clearing underbush, any other clearing, like the younger trees with smaller girth and any saplings goes against the NGT judgement and therefore would be in contempt of court.
Until proper planning for Auroville has been completed, which would naturally include feedback and approval from the community, and Environmental clearance has been received, no further construction can take place in the Master plan area. A project that requires a change of the existing environmental conditions and land use would also be considered “construction” when referring to the aspect of environmental clearance. Any cutting of trees or major clearing of undergrowth should not be undertaken before proper land allocations have been made. The validity of changing this densely forested green area designated as Urban parks, into a flower garden, which by definition would require the cutting of the majority of the trees in order to grow flowers, as they will not bloom if they do not have sunlight, is questionable to say the least.

It is also important to note that this green area has been protected by fencing and no human activity for several decades, as a result of which it has become the habitat of some endangered species like monitor lizards etc.
There are several other concerns regarding the project that were obviously not taken into proper consideration in the ‘permission’ you were given.
One of the main concerns is the water consumption. It is not clearly described where the water for the project will be sourced. And what the agreements with the neighbors for sourcing the water are. The amounts that you have specified in the application do not correspond to the project description of a flower garden and a plant nursery.

Regarding the position and location of the proposed building. The choice of location seems very unfortunate as it is neither on the crown as a typical crown development, nor far away enough from the crown to allow for the crown to be developed properly in that space.

We hope that the above concerns can be addressed properly and reconsidered before proceeding with the project in this location. There will be opportunities to submit proposals such as this as part of the proper planning of Auroville to ensure a balance between the environmental, social and unique economic needs. 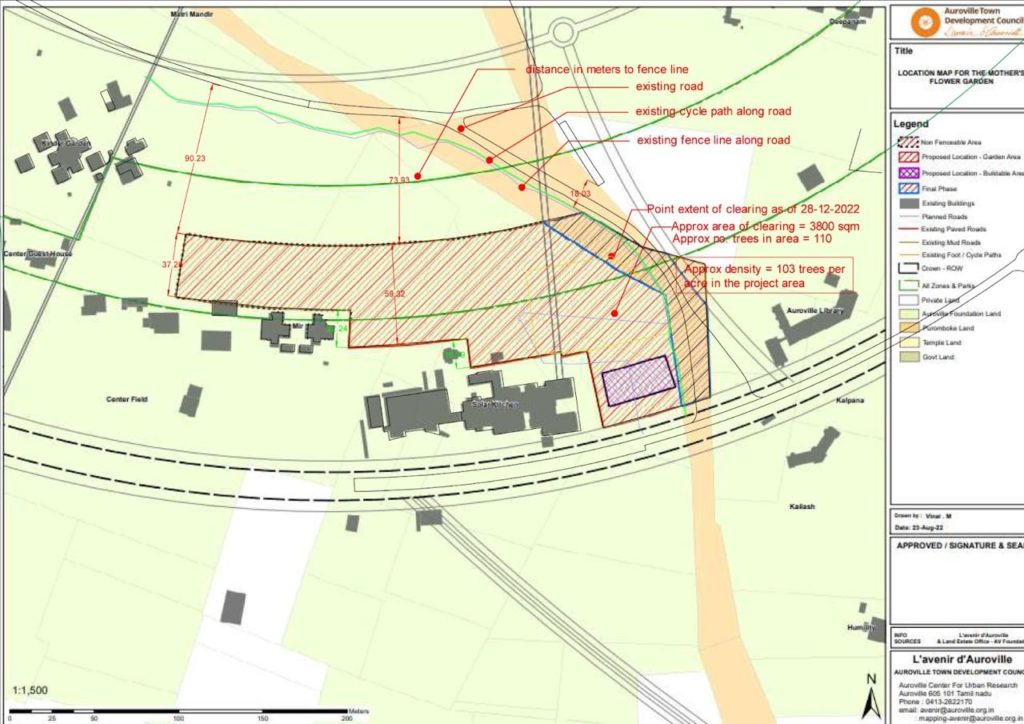