or the Mischief of Cheshire Cat

Here is the untold story about the secret link between the Galaxy, the Master Plan and the Mother’s Symbol. A very interesting story, indeed, which may be at the root of a lot of confusion in the present debate about clearing the 12 radials and the outer ring road, a story which may remind us of a famous tale cherished by many kids, young and old, all over the world …

But first, before we go down the rabbit hole, let’s look at the facts…

On 23 June 1965, when Mother described to Satprem her plan of the future town, she said:  “At the time [early 1938] I told Antonin Raymond, who built “Golconde,” about the project, and he was enthusiastic, he told me, “As soon as you start building, call me and I will come.”

“I showed him my plan (it was on the model of the [my] symbol, enlarged), and he was quite enthusiastic, he found it magnificent. It fell through.”

In all likelihood, Mother had sent to Roger a transcript of this entire conversation in order to brief him on the plan she has just “received”. This probably explains why the road network of the Nebula model is based on Mother’s symbol. 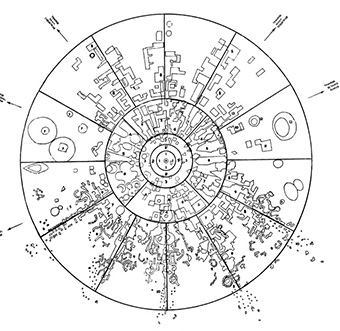 Its roads network is based on Mother’s symbol.

But The Mother was not convinced by this first design and Roger worked for about two years on various options till he finally designed the Galaxy Model in 1968.

One of these, the Macrostructure, designed in 1967, was based on a deformed symbol of The Mother: 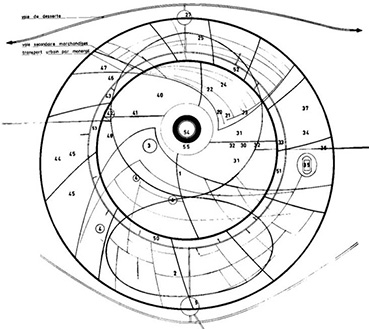 Its road network is based on a deformed symbol of the Mother.

Then, in 1968, the first master plan of the Galaxy model, shows clearly 12 equidistant curved radials but two of them are in doted lines indicating that they are optional (if not built we would have then 10 or 11 radials which, at once, would disconnect the road network from the Mother’s symbol). 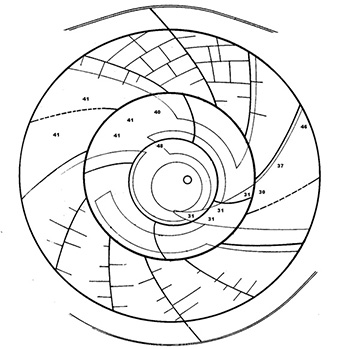 In 1969, Roger designed a new master plan. It was part of a “Study of the Town Plan – First Approach” prepared by Roger and his Paris team and it was sent to Ford Foundation on March 13th 1969 with an accompanying letter signed by Mother. 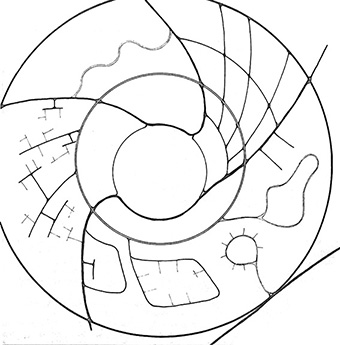 As we can see, the plan display only 9 radials and The Mother’s symbol disappeared

Interestingly, the 1969 Master Plan had to be modified following the rotation of the galaxy by 50° CCW in July 1971. It seems that the reason for rotating the Galaxy was because the Bharat Nivas had been built at the wrong place (which should have been within the International Zone). When the problem was presented to The Mother she just took the plan and rotated it in such a way that the BN was now properly sitting in the International Zone (correct me if I am wrong). 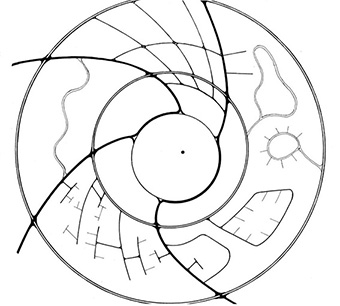 9 radials and no more Mother’s symbol

So, except for the rotation of the entire concept, the 1971 Master Plan is exactly the same as that of 1969. As Roger will modify the galaxy’s road network in 1988 only, this concept of road network remained unchanged during 19 years (1969-88). It is the last official one during Mother’s lifetime. 9 radials and no more symbol.

Interestingly, when we superimpose the 1971 road map to the original Galaxy, it almost perfectly match with the galaxy model approved by the Mother : 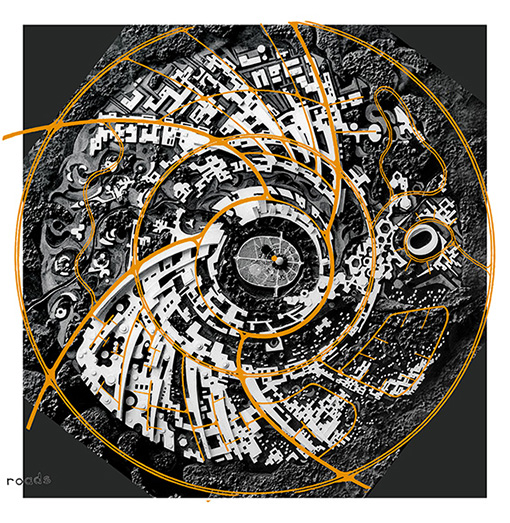 and the last official one during Mother’s lifetime.

In 1975, as the bulk of the community and the S.A.S. were fighting an open battle, there was no money whatsoever for development. As Roger was attacked by Huta and her supporters regarding his plans of the Urn and of the town, he sends a letter in which he announced his “withdrawal from all Auroville activities” and acts on it. Nobody knew whether Auroville would survive this ordeal and whether Roger will ever return – and, if so, when?

But after a long absence of about 10 years, Roger did start to visit Auroville again in 1985 and in 1988 he became de facto in charge of Auroville’s planning. It is during this period (between 1988 and 1999) that a new road map with 12 equidistant radials was re-introduced (4 of which in dotted lines as optional), the radials being “the dynamic representation of the Mother’s symbol” (Auroville Mobility Plan 2005). This plan was the one ratified by the Residents Assembly in 1999: 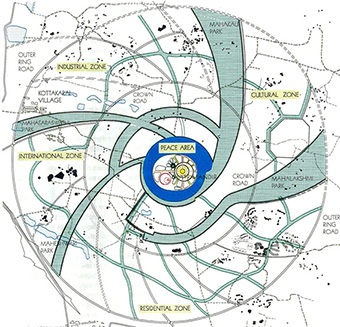 Now, in the 2001 printed master plan approved by the H.R.D. Ministry four radials disappear and we are left with only 8. Once again the Mother’s symbol disappear… 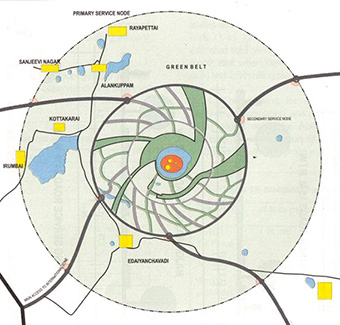 8 radials and the Mother’s symbol disappears

Finally, in 2004 a new master plan is produced with again 12 radials and it seems that’s what we are supposed to implement today. 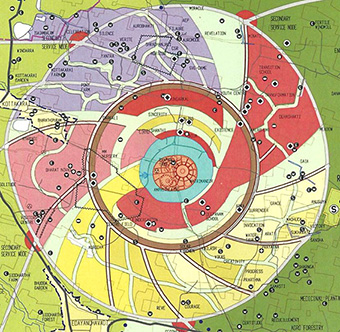 12 radials and the Mother’s symbol reappears

The story of the 12 radials and the Mother’s symbol appearing and suddenly disappearing throughout all these years sounds a bit like a mischief of the Cheshire Cat in wonderland, isn’t it? And this time again, Alice seems to be a little lost… 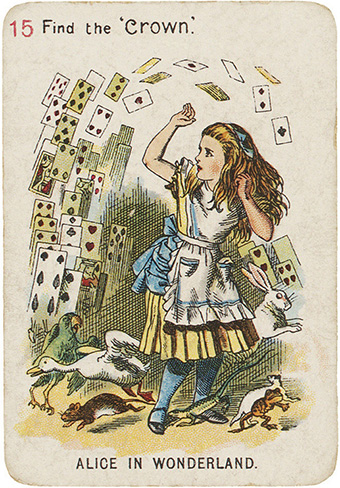 Now, shall we, with Alice, ask our way to the Cheshire Cat?

Alice : “Cheshire Puss, would you tell me, please, which way I ought to go from here?’

Cheshire Cat: “That depends a good deal on where you want to get to”

Cheshire Cat : “Then it doesn’t matter which way you go”

Cheshire Cat : “Oh, you’re sure to do that  if you only walk long enough.”

Alice : “What sort of people live about here?”

Alice : “But I don’t want to go among mad people”.

Cheshire Cat : “You must be or you wouldn’t have come here.”

Alice didn’t think that proved it at all; however, she went on…

Cheshire Cat : “To begin with a dog’s not mad. You grant that?”

Cheshire Cat : “Well, then, you see, a dog growls when it’s angry, and wags its tail when it’s pleased. Now I growl when I’m pleased, and wag my tail when I’m angry. Therefore I’m mad.”

Alice : “I call it purring, not growling”

Cheshire Cat : “Call it what you like.” And then the Cat vanished.

Alice was not much surprised at this, she was getting so used to queer things happening. While she was looking at the place where it had been, it suddenly appeared again.

Cheshire Cat : “By-the-bye, what became of the baby? I’d nearly forgotten to ask.’

Alice : “It turned into a pig”

Cheshire Cat : “I thought it would”

And then the Cat vanished again to reappear little later, sitting on a branch of a tree. 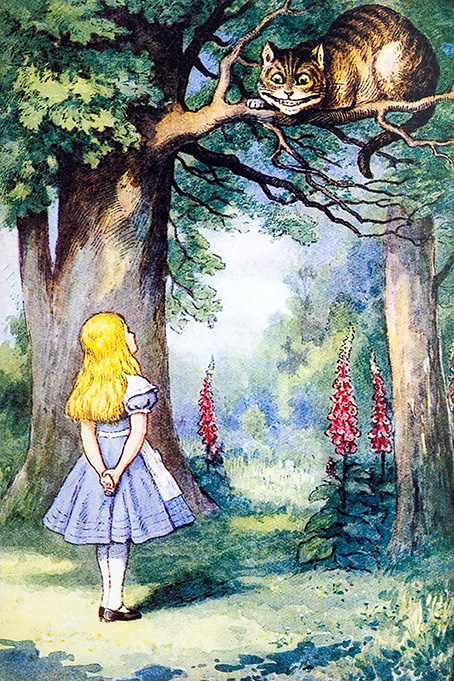 Alice : “I said pig and I wish you wouldn’t keep appearing and vanishing so suddenly: you make one quite giddy.”

And this time it vanished quite slowly, beginning with the end of the tail, and ending with the grin, which remained some time after the rest of it had gone.

Alice : “Well! I’ve often seen a cat without a grin, but a grin without a cat! It’s the most curious thing I ever say in my life!”

To tell you the truth, I confess that, me too, I’ve never see a grin without a cat. Did you? But thanks to Alice and her friend, we are now having a clearer picture of were we are, isn’t it? 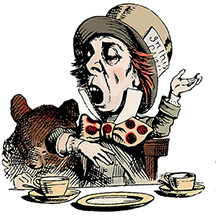 PS: Could we get out for a moment of this surrealist dream and ask ourselves a few simple questions:

1. By trying to adapt the Mother’s symbol to the Galaxy and vice versa, aren’t we going to get something which will look neither like the symbol nor the original Galaxy model?

2. Isn’t it that the hectic development of the radials concept obviously shows a lack of conviction and consistency from the architects and planners? And can we therefore say that the embedding of the symbol in the Galaxy might not necessarily be part of the Mother’s “vision” for the city, especially if we consider that on the last plan approved by her there was only 9 radials?

3. If this is the case, then, can we say that the number or radials should be defined according to the mobility NEEDS instead of a particular symbolic meaning?

4. Consequently, wouldn’t it make sense to clear and build the roads only according to the PRESENT needs and see how things evolve and how many of these radials we will finally need for the whole city without anticipating?

These are important questions that need to be answered before any clearing are happening for the radials and outer ring road, otherwise we may end up with an other surrealistic situation but, this time, I’m afraid it will not be a dream from Wonderland… 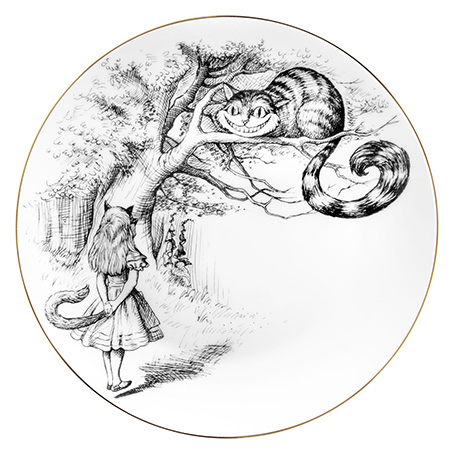