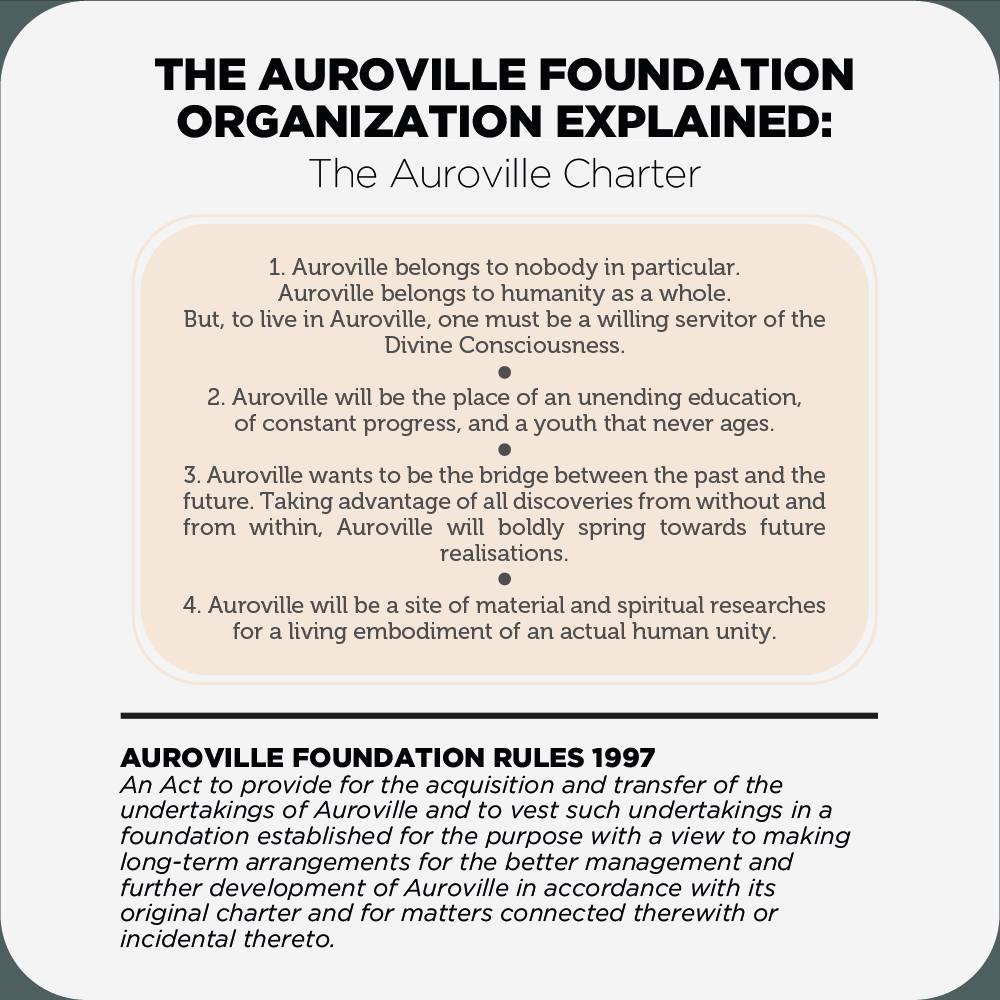 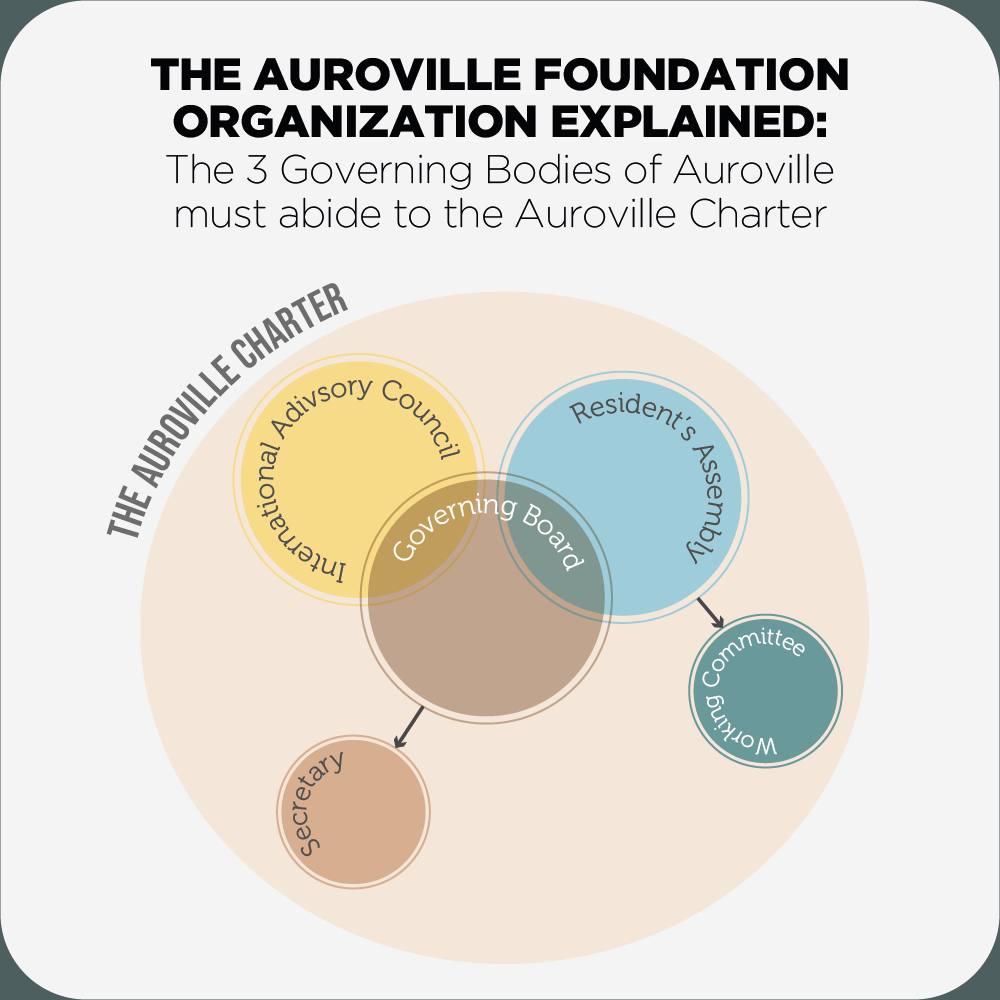 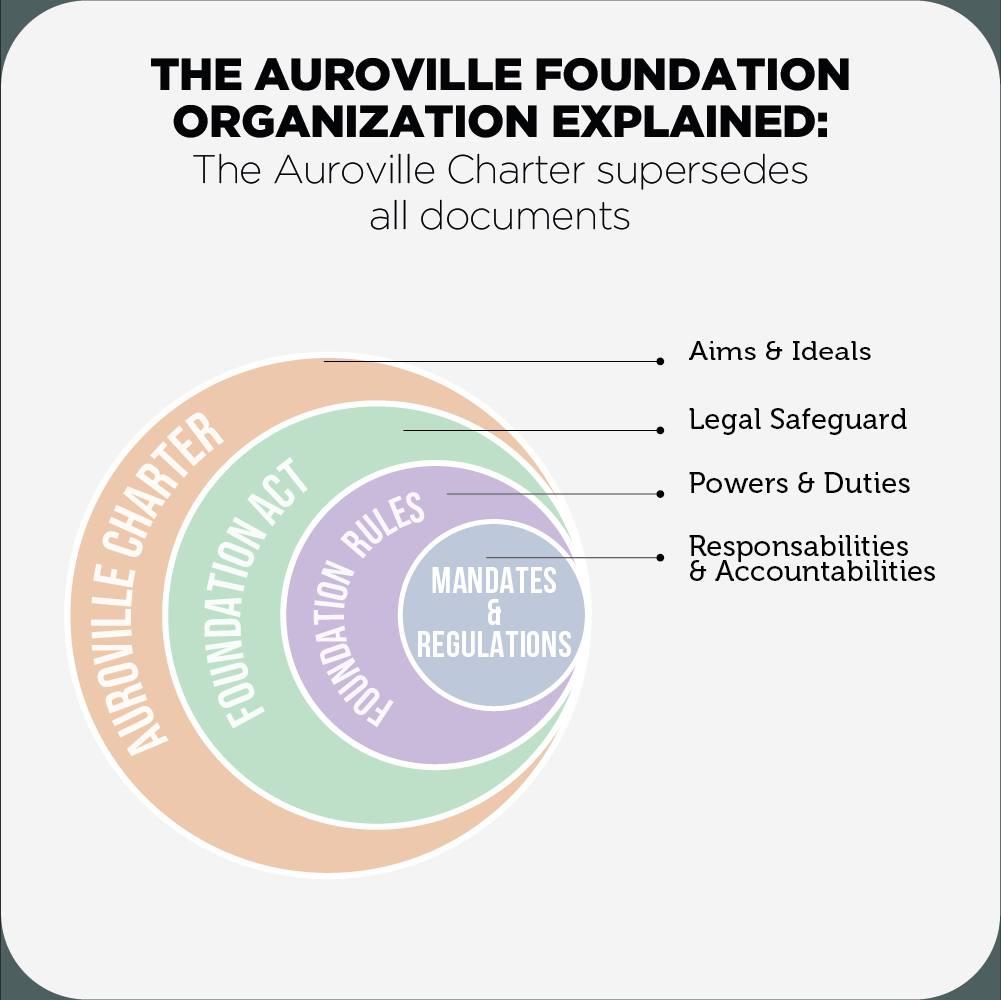 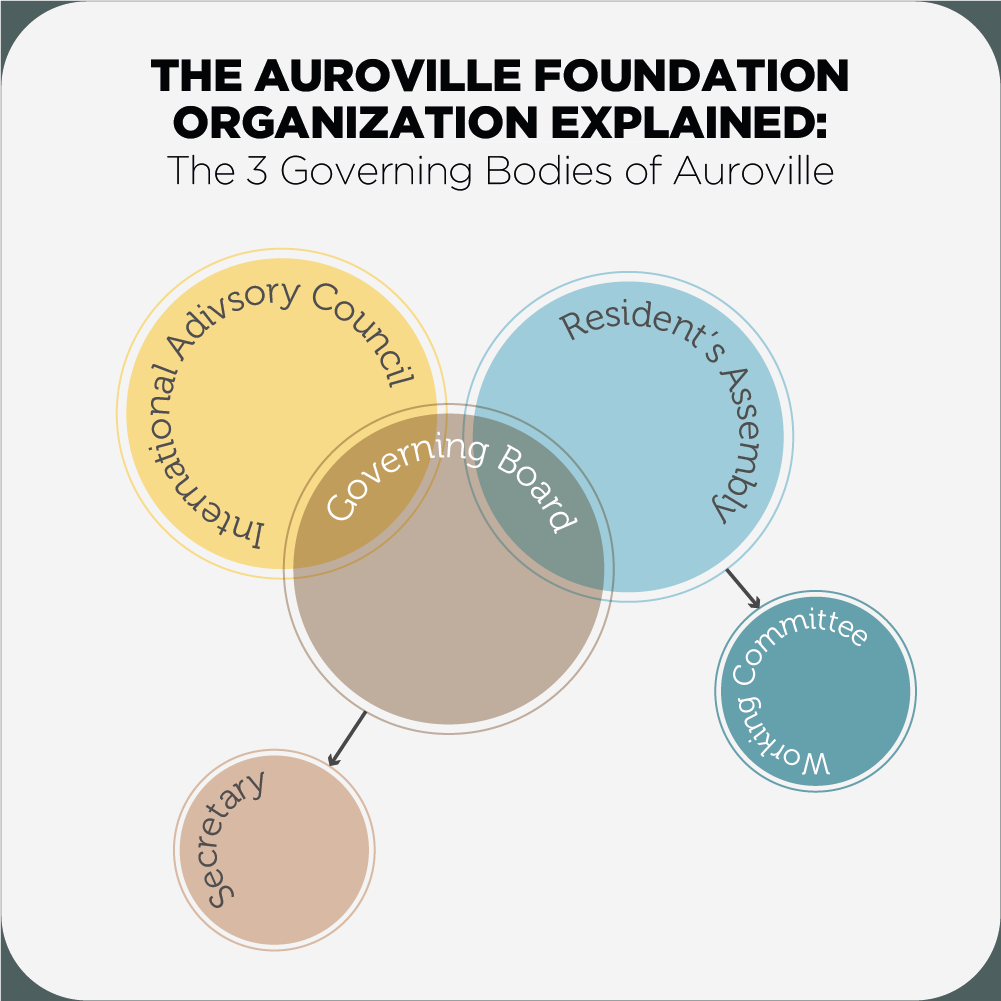 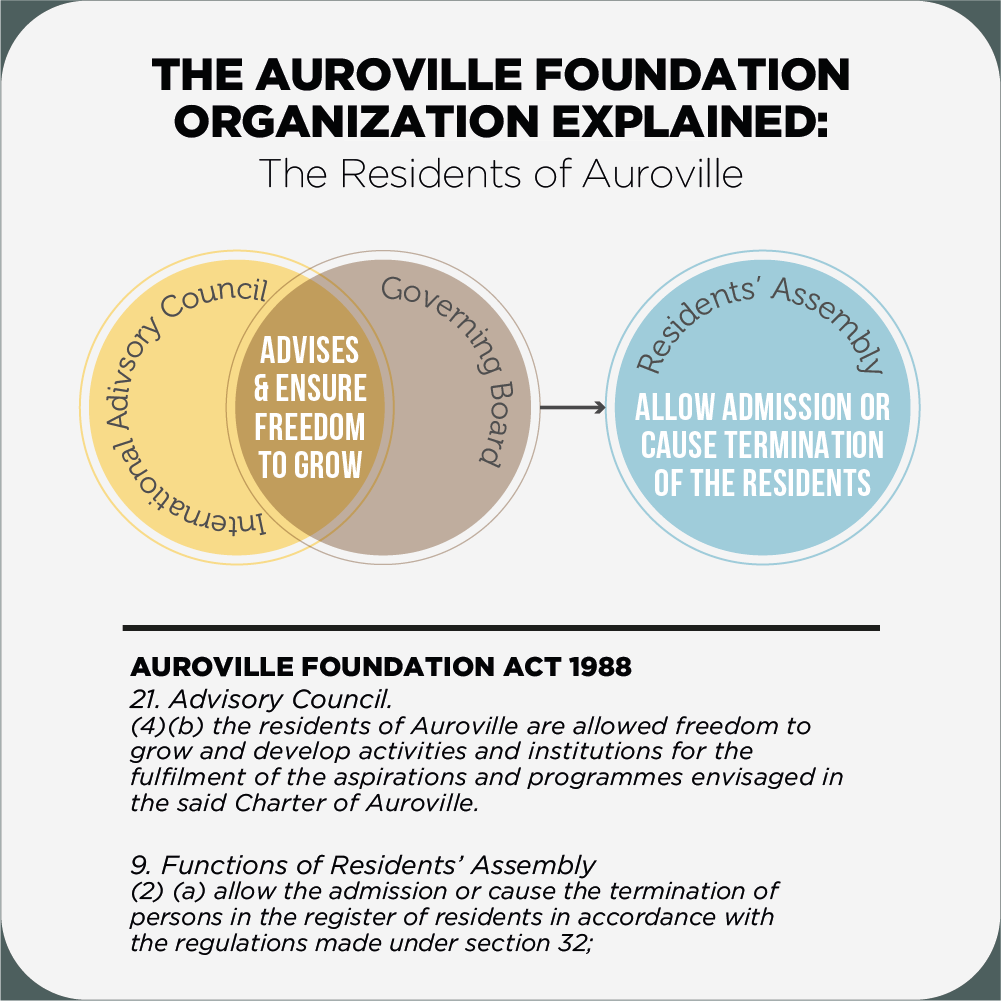 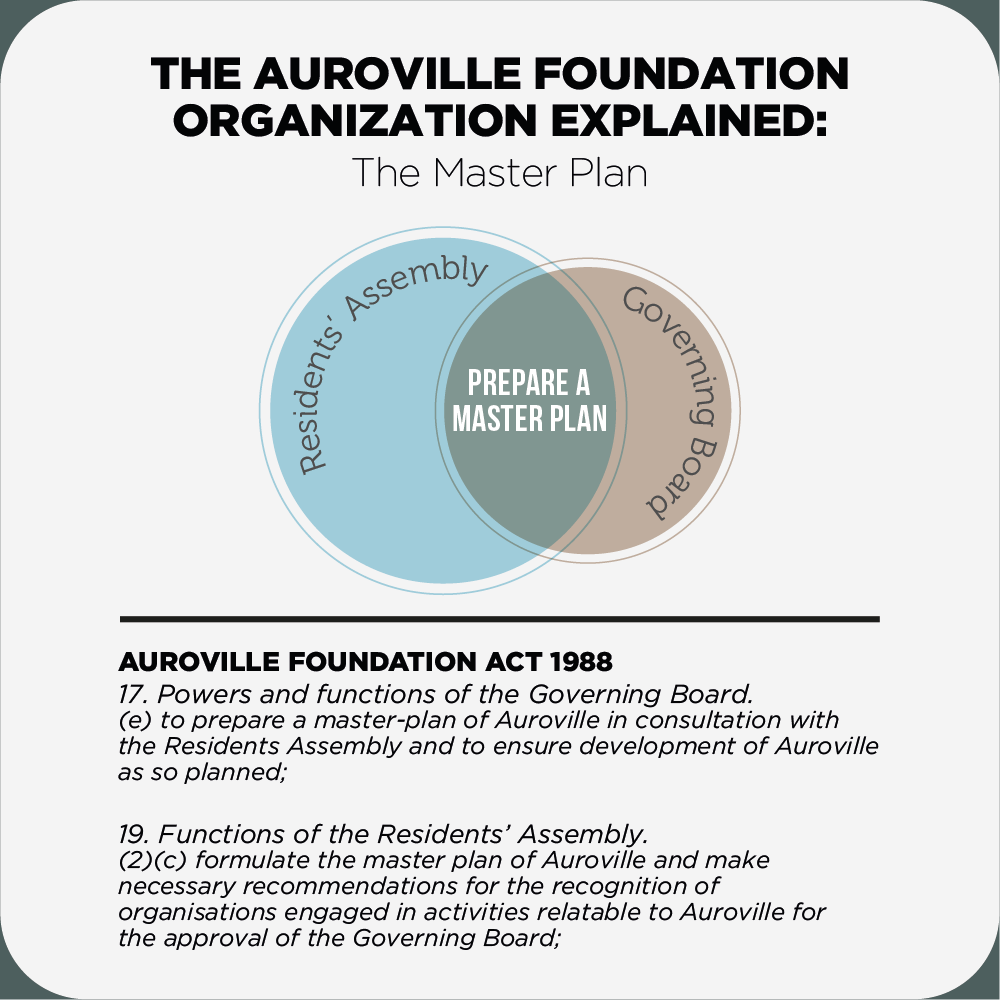 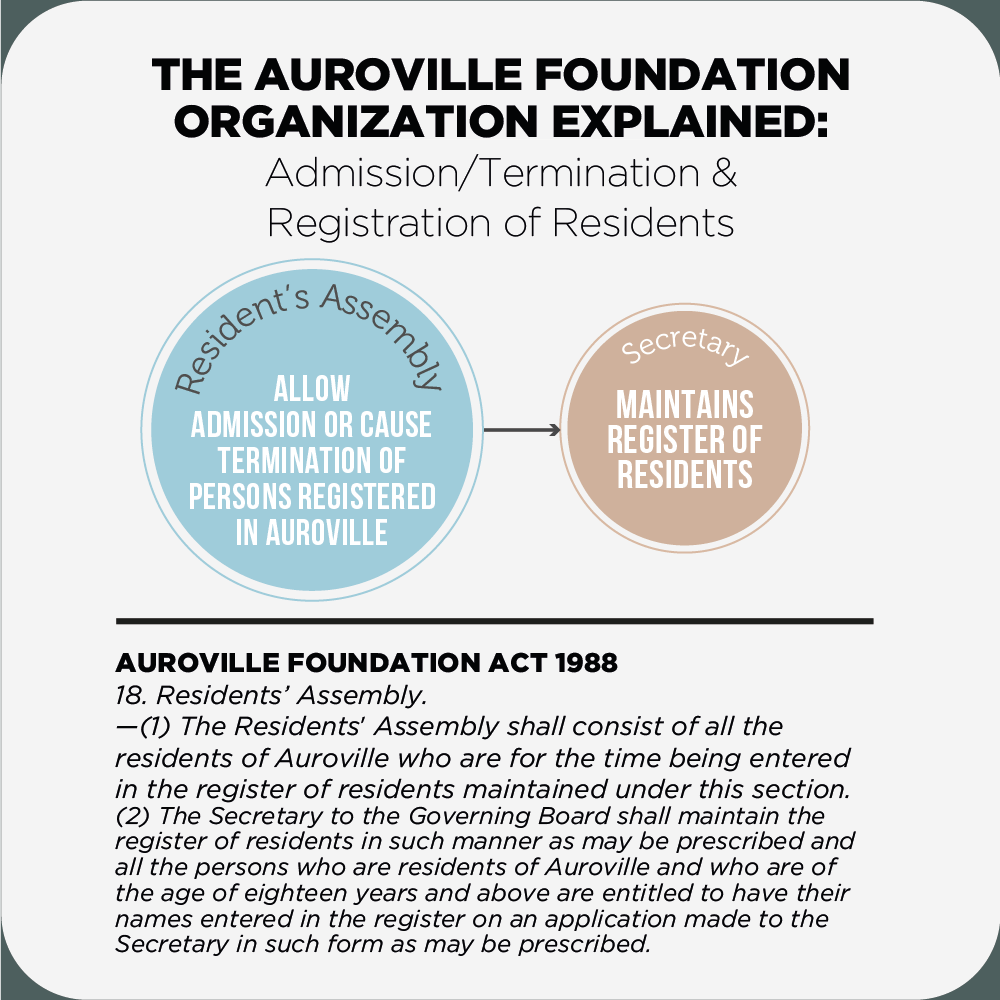 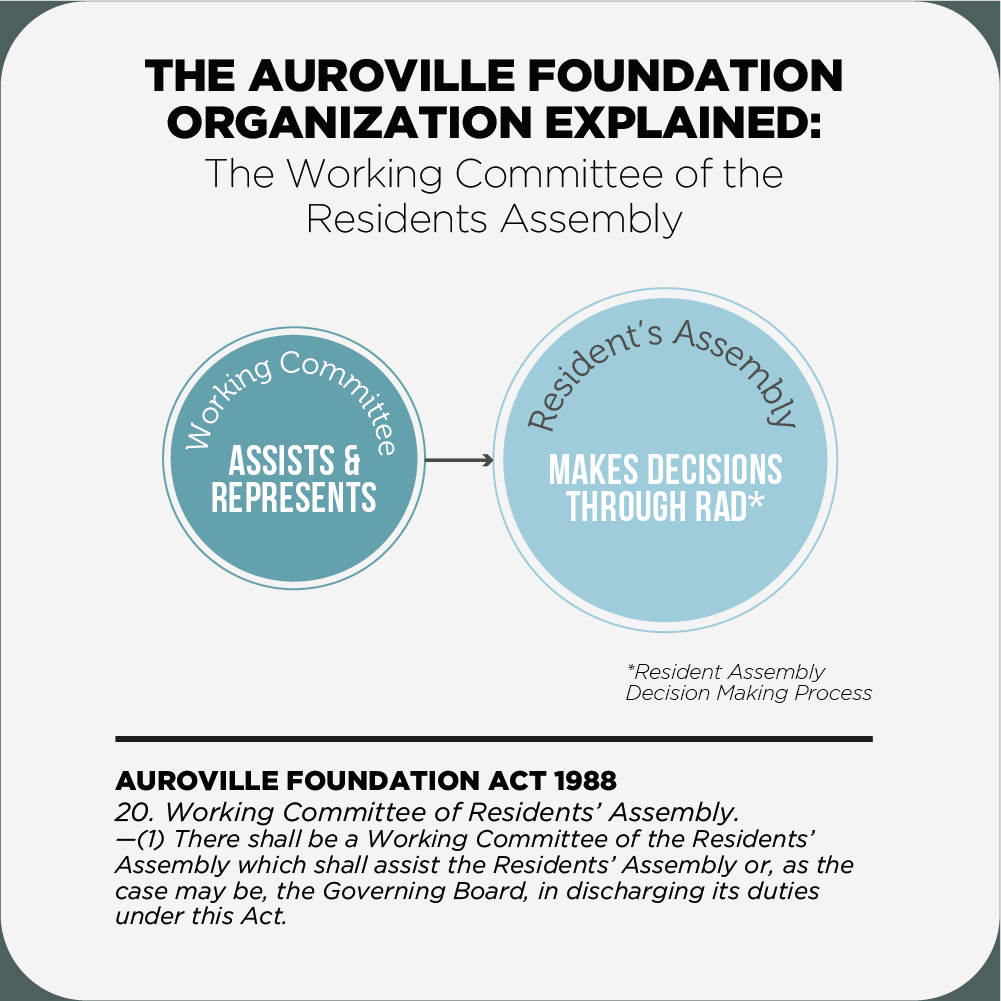 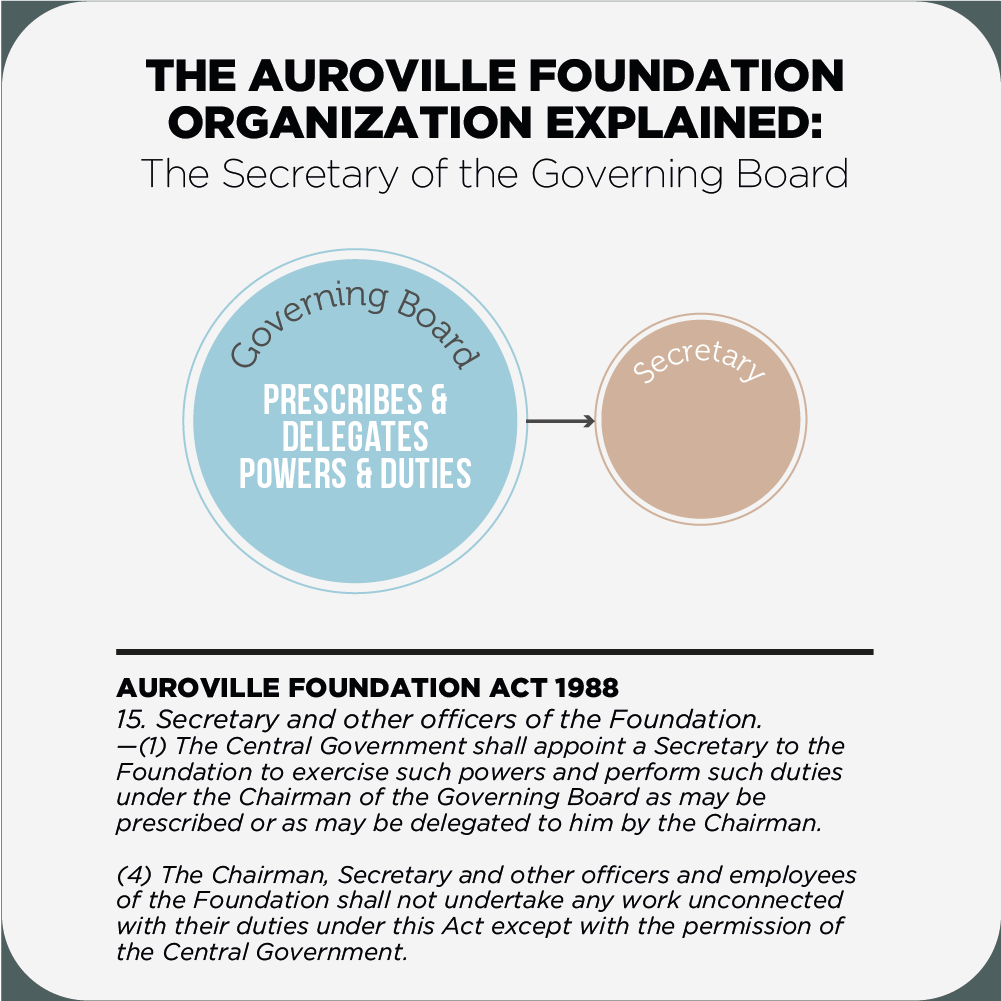 Talk by Kireet Joshi on the Foundation Act From a talk given in Auroville on the 19th July 2003:

“This particular act has been so designed that even as it is, whatever it is, you have complete freedom to develop Auroville according to the Charter of Auroville, there’s nobody who can prevent you, as long as you say and you can show that you want nothing but the Charter of Auroville. You have complete freedom. And how is this been designed? There are three provisions in the Act. We say there will be a governing body, there will be an international Advisory Council, and there will be a Residents Assembly and all the three are equal authorities. And what will be the relationship between these three bodies? The relationship is of mutuality and this word ‘mutuality’ is very important.

The true soul experience is an experience of mutuality. Egoistic experience is an experience which wants to throw away everybody else, egoistically, as if we have nothing to do with anybody else. Even if you try to do it, it is impossible. In this world, as Sri Aurobindo says, there are always three terms of existence: the individual, the group in which he lives, and largest group which is humanity as a whole. And nobody can get rid of these three terms. The world cannot get rid of groups and the individuals, individual cannot give up group or their largest group, and no group can exist without a membership of individuals and the largest group around. The three are inter related. There is a spiritual unity of the three, individual, groups and the largest group.

Therefore, if you are really spiritually governed, you will see mutuality of the three. It is in mutuality of the three but it depends how you develop this mutuality. And Sri Aurobindo says “by no mechanical law can you attain to this mutuality”. It is only when you develop true brotherhood and you exercise true brotherhood that this mutuality can be experienced and can be realised. Now, this Auroville Act has been so enacted that, whether you like it or not, you are bound to develop brotherhood. It’s a kind of a gift. This act is of such a nature that you are bound, even if you want to throw away brotherhood, you are bound to have it, it’s like a spiritual compulsion. It is laid down that Auroville will be organised by the people of Auroville. Secondly that the freedom of individuals in Auroville, as long as they develop according to the Charter, nobody can infringe it, not even Governing Board. Governing Board, of course, has the power of control, supervision, to see that everything is run smoothly and, particularly, that it is bound to promote the ideals of Auroville. This fundamental heavy responsibility assigned to it ensure that the aims of the Charter are fully promoted and implemented.

The most important function of the International Advisory Council is to advise and to make sure that the freedom of the members of Auroville is guaranteed. This is the function of the Advisory Council. If the Governing Board takes any arbitrary action by which the freedom of Auroville is infringed, if you can prove that this action infringes the freedom of Auroville to promote the Charter of Auroville, it can be knocked downed. So you can see the mutuality. The Governing Board has to salute the Residents Assembly, has to give assurance to the Advisory Council that its actions are not arbitrary, Residents Assembly has to salute the Governing Board—nothing wrong in saluting anybody. This is the called mutuality, saluting each other is a fundamental law of life. To egoism, this kind of a salute is very difficult to digest. Why should I salute anybody in the world? But so long as we live in that consciousness, we are not acting according to the Charter of Auroville.”

The Governing Board has overall responsibility for the ongoing development of Auroville in keeping with its aims and ideals. It is composed of a number of eminent individuals, mostly Indian nationals, as well as ex-officio Indian Government officers.

The International Advisory Council has the function of advising the Governing Board on matters relating to management and development of the township. It is normally composed of five outstanding individuals of high international repute, usually from different nations.

The Residents Assembly comprises all residents of Auroville on the Master List over the age of 18. This body monitors the various activities of Auroville, decides on the terms of its membership, and is responsible for evolving and implementing a Master Plan for Auroville’s future development in consultation with the Governing Board. It selects a Working Committee as interface with the Governing Board, the Secretary, and the other groups of collective service to Auroville.

There is also a Secretary to the Foundation, appointed by the Government of India, who resides and has an office with supporting staff in Auroville.

Structure of the units of the Auroville Foundation

18. (1) The Residents’ Assembly shall consist of all the residents of Auroville who are for the time being entered in the register of residents maintained under this section.

(2) The Secretary to the Government Board shall maintain the register of residents in such manner as may be prescribed and all the persons who are residents of Auroville and who are of the age of eighteen years and above are entitled to have their names entered in the register on an application made to the Secretary in such form as may be prescribed.

19. (1) The Residents’ Assembly shall perform such functions as are required by this Act and shall advise the Governing Board in respect of all activities relating to the residents of Auroville;

(2) In particular, and without prejudice to the foregoing powers, the Residents’ Assembly may-

(a) allow the admission or cause the termination of persons in the register of residents in accordance with the regulations made under section 32;

(c) formulate the master plan of Auroville and make necessary recommendations for the recognition of organizations engaged in activities relatable to Auroville for the approval of the Governing Board;

(d) recommend proposals for raising funds for Auroville for the approval of the Governing Board.

(3) For the purpose of carrying on its functions, the Residents’ Assembly may establish such committees as it may consider necessary which shall represent it in relation to the functions to be performed by the Governing Board.

The Working Committee of the Residents’ Assembly

Mother replies to a disciple worried after being informed of some discussions happening on Auroville being part of an outside project:

I do not know who told you that – but there is a misunderstanding somewhere because to hand over the management of Auroville to any country or any group however big it may be is an absolute impossibility. 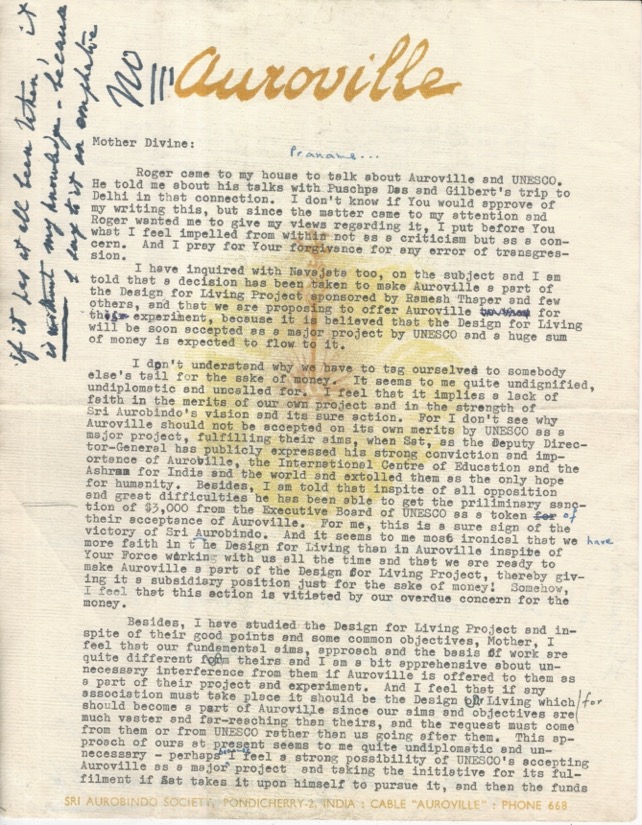 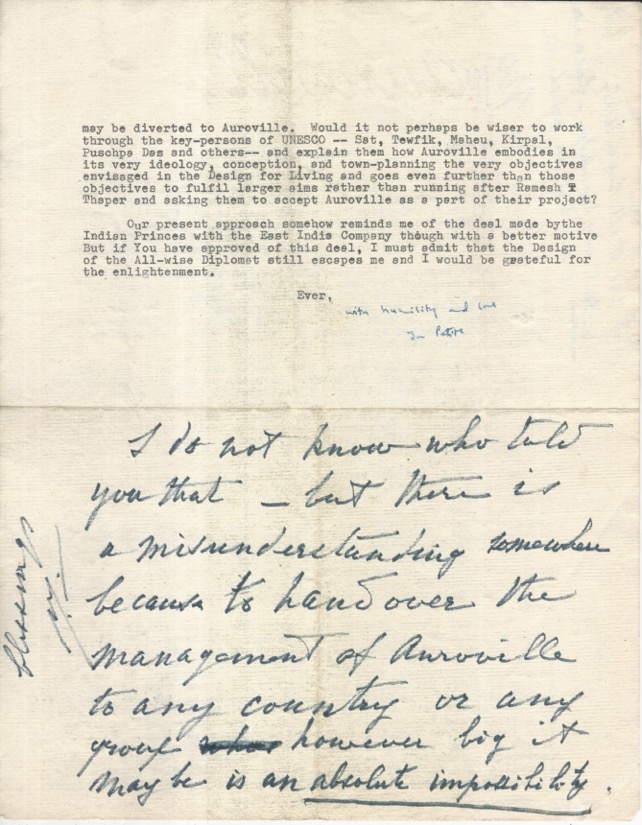 Sri Kireet Joshi, was the Education Advisor to the Government of India, and Chairman of Auroville Foundation.

This talk, given by Sri Kireet Joshi on 19 July 2003, explores the subject of Self Governance in Auroville. Being the main architect of the Auroville Foundation Act, Sri Kireet Joshi gives us an enlightening perspective about what the Auroville organization could be and how we could reinvent the way we are living together to fulfill the Dream which brought us here.